"Many people think of perfectionism as striving to be your best, but it is not about self-improvement; it's about earning approval and acceptance." -Brene Brown

Perfectionism is what’s standing in the way of those last 5 lbs.

I'm sure you've heard yourself or a friend say something to the effect of, “Sigh! I’ve ruined my diet for today. I was doing so good! Since today is a wash, I might as well eat the whole box of double stuf Oreos.” This is textbook perfectionism.

Why throw in the towel so readily?

Rather than admit mistakes, shrug them off and keep pressing onward, we reflexively deflect them.

Fear of failure and shame manifests itself in self sabotage. We never fully commit so when we make mistakes, we can say, “I wasn’t really trying”.

I had this mentality pretty much throughout my entire academic career. That way, when I got C’s I didn’t take it personally. “I wasn’t trying that hard. If I actually tried I would totes get an A. Obvi”.

What if I tried my hardest and my grades didn't improve? When you give it all you got and still “fail”, are still “imperfect”, what then? By never committing, I never faced that potentiality.

This is an inherently guarded position. I was preemptively shielding myself from vulnerabilities. #likeaboss

"The cave you fear to enter holds the treasure you seek." - Joseph Campbell

We often don’t realize fear is holding us back until we dig reallll fuckin’ deep. At least I didn't.

If you don't know something is an obstacle, it’s tough to conquer it.

To grow, to change your life, you need to be as Brene Brown puts it, “shame resilient”. You must conquer your fear of shame and accept it's potentiallity.

In other words, you need to break up with perfectionism.

You may be afraid of letting go of perfectionism if you feel it’s the glue holding you together-- that if you stop being a perfectionist we’ll completely lose control.

Nothing could be further from the truth.

When you let go of perfectionism you allow yourself to make mistakes and leave yourself vulnerable to shame. Rather than staying shielded away in your fortress of solitude AKA your comfort zone, you give yourself permission to relentlessly drive forward.

Fat loss might not seem bold, but anytime you attempt to do anything difficult, you open ourselves up to fear and shame.

Here's what it takes to finally drop those last few lbs:

You need to be brave enough to tread new waters and face the anxiety that comes from letting go of something that’s always been there. 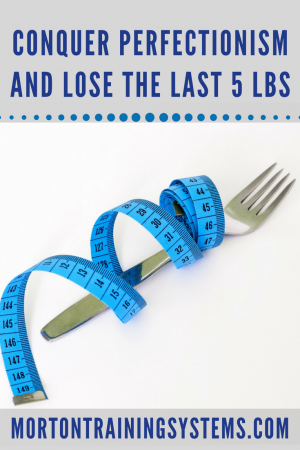